The Greatest Teacher, Accidents Are
Articles

Requiring an estimated crew of 250,00 and spanning 140 km across, all of the trees on the forest moon of Endor would have been needed to print the design documentation of the Death Star.

Despite the best design team in the galaxy, there was a significant risk that they did not adequately address: a direct shot into a thermal exhaust port could hit the fusion generator, destroying the Death Star. If only the Empire had embraced the power of the Bowtie Diagram, then Luke Skywalker’s epic X-wing flight would have been so very different, the rebellion crushed, and may have spared us the prequels.

When viewed in a traditional table format, it appears that there are enough safeguards to prevent the Death Star’s destruction. 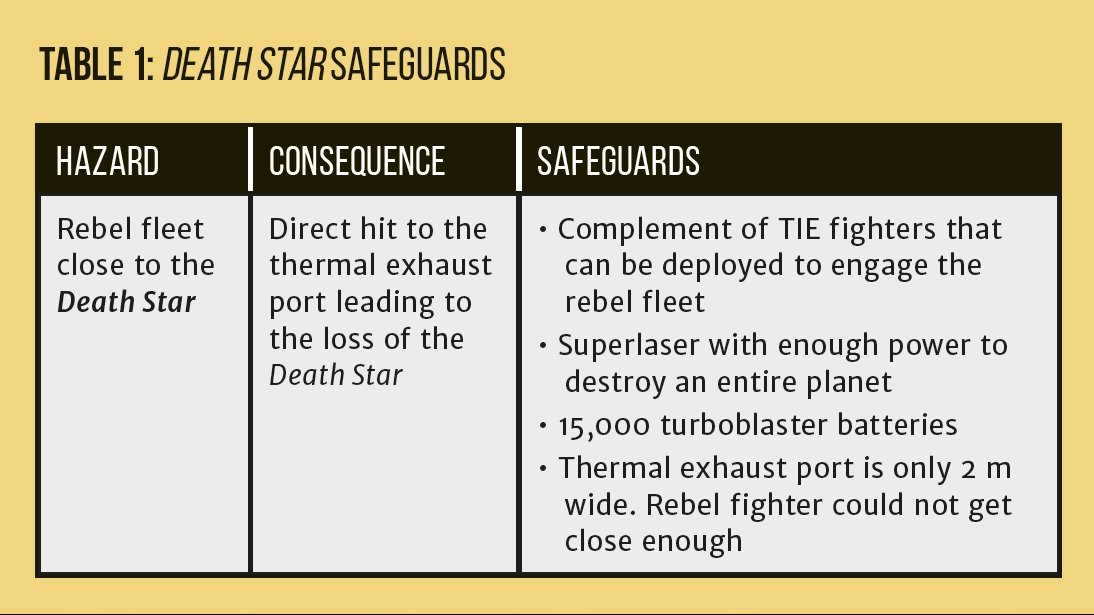 Considering the same scenario through a Bowtie Diagram allows us to look at the barriers in sequence and break the hazard down further into specific threats. We immediately see that not all the barriers previously identified are specific to each threat. For example, the Superlaser won’t destroy small, agile fighters. It’s also clear that none of them mitigate the consequences of a direct hit

Looking even further into degradation factors, which show us what can make a barrier fail, it’s evident that there are factors present that could contribute to the impairment of these barriers.

It’s at this point that the design team realise that there is enormous reliance upon the pilot-operated TIE fighters as well as turbo blasters and that crucially, if an X-wing was to get close enough to make a direct hit and if the Millennium Falcon turned up (which it did), the situation was not recoverable. Using Bowtie Diagrams in the design of the Death Star may have identified this scenario, and adding additional barriers or changing the design would have been considered.

The power of the Bowtie Diagram is apparent for all to see. If prepared correctly, it allows those using it to understand their risk and make informed decisions as to whether there are sufficient barriers in place.

We shouldn’t be too surprised at the Empire’s failure to spot this risk given their handrail policy.

This article was originally published in the Chemical Engineer https://www.thechemicalengineer.com/features/the-greatest-teacher-accidents-are

Back to all Articles